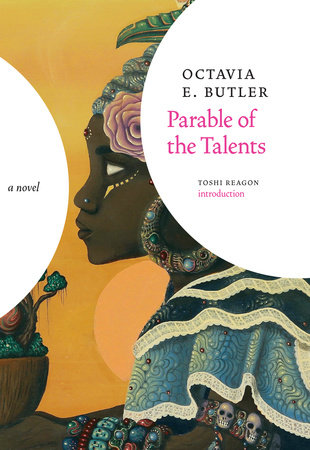 Parable of the Talents

The riveting sequel to Octavia Butler's bestselling Parable of the Sower, now with a new introduction.
Parable of the Talents celebrates the classic Butlerian themes of alienation and transcendence, violence and spirituality, slavery and freedom, separation and community, to astonishing effect, in the shockingly familiar, broken world of 2032. Long awaited, Parable of the Talents is the continuation of the travails of Lauren Olamina, the heroine of 1994's Nebula-Prize finalist, bestselling Parable of the Sower. Parable of the Talents is told in the voice of Lauren Olamina's daughter—from whom she has been separated for most of the girl's life—with sections in the form of Lauren's journal. Against a background of a war-torn continent, and with a far-right religious crusader in the office of the U.S. presidency, this is a book about a society whose very fabric has been torn asunder, and where the basic physical and emotional needs of people seem almost impossible to meet.

"This work stands out as a testament to the author's enormous talent, and to the human spirit." —Publishers Weekly

Other books by this author